Yes but my RRSP are fine

Home → By Erik → Yes but my RRSP are fine 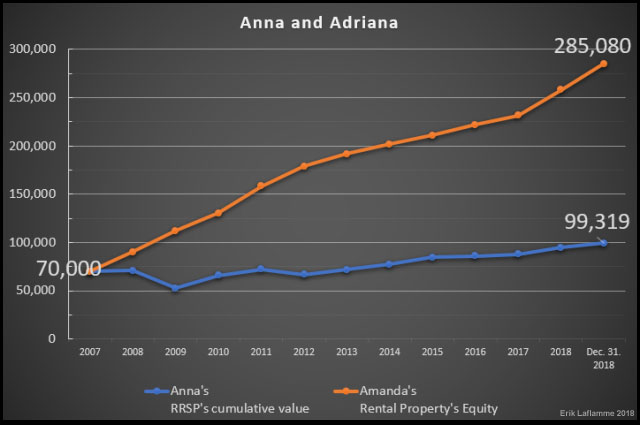 “Yes but your RRSP are fine and you have a Government employee pension plan..”

If you still hesitate about investing in real estate and keep your money in RRSP consider this fictitious graph based on real numbers.

Most real estate investors are saying that if you have a choice to put your money, put it in real estate instead of your RRSPs. Most never compared both returns because we all know it is better.  I put this graph together to show you what they are talking about. Hopefully this will blow your mind!

Anna and Adriana are sisters who each had $70,000 in 2007.  Anna put it towards her RRSP and Adriana bought a rental property in Ottawa.

-Rental property is a 3-bedroom typical detached house in Ottawa;

-Anna’s RRSP’s yearly rate of return is based on my portfolio’s return with a yearly average of 4% return but fluctuated as low as -26% and as high as 25%;

-Both RRSP and house appreciation were 4% each on average!

-No fear of what can happen in real estate, there are always solutions. 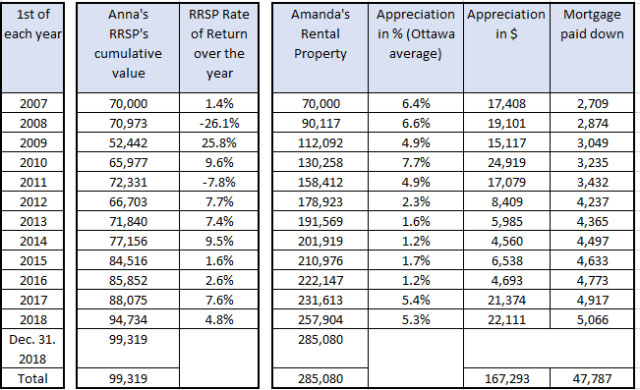 So which one is better?

Does that convince you (at least if you are someone who likes numbers and wants to take control of their financial future)!? I wish I would have had $70,000 in 2007!

Not all is lost for Anna and you, there are advanced real estate strategies like a self- directed RRSP invested in real estate.

What will you give as a Legacy? You do not have to invent all the tasks by yourself, let me help you prepare your legacy.

Previous Post
Me on Stage at OREIO vs Legal Basement Units

Next Post
Is Blockchain the Sleeping Giant Of Commerical Real Estate

What Can Go Wrong